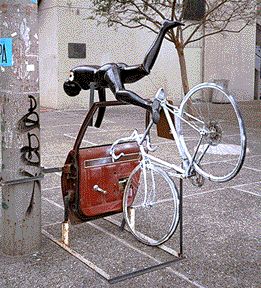 What is a “Dutch Reach”?

Ever heard of the “Dutch Reach”?  It’s simple to do.  And is easy to remember.  Consider the risks of both the drivers and passengers as well as cyclists in urban environments.  If you have ever ridden your bicycle past a row of cars, you probably experienced it.  That feeling in your gut, worried that someone might suddenly open their door in front of you.  If you never thought about it before, chances are that you will now.

The fact is that “dooring” incidents are fairly common.  In the City of Chicago, many traffic lanes that are designated for bicycle traffic run parallel to parked automobiles.  That means that cyclists who are whizzing by at a reasonable cycling speed are susceptible to sudden impact if a driver or passenger opens their door at the wrong incident.  And the lane configuration can be such that, even if the cyclist sees the door open in time, they may not have better options: either they swerve into traffic, into an “El” support post, or brake and flip over their handlebars.  None of those are safe alternatives.

But they have been teaching a very simple and safe technique in The Netherlands for decades.  Amsterdam is one of the most bicycle-friendly cities on Earth.  So, it is no wonder that auto drivers in that City have gotten used to safely dealing with being surrounded by cyclists.  The technique (diagrammed here), simply requires that you reach with your OPPOSITE hand to open the door from the inside.

“Reach” is Simple and Safe

Think about it: reaching across your body will force you to turn your torso, which turns your head, which directs your attention at the side-view mirror and even to look next to you into the ‘blind spot.’  This means that the person opening the car door will always be checking to make sure it is safe before opening a door. Which eliminates the risk for a “dooring” injury.

“Dooring” injuries can be very serious: from the impact with the door, to falling off the cycle and hitting the ground.  Riders can sustain everything from road rash to broken bones and muscle tears and even traumatic brain injuries.  The Illinois General Assembly has passed a new law, which is waiting for the Governor’s signature to become Illinois Law, which will require the “Reach” to be taught as one of the rules of the road–and would be on driver’s exams.

Even before it becomes law, and even if it does not become law, you should practice it when you open your car door.  Injured cyclists can sue drivers if they were negligent in failing to check that it was safe to open their doors.  This law will make those claims stronger.

If you have been injured while on your bicycle, whether from a ‘dooring’ or some other negligent act, please give us a call so that we can help.