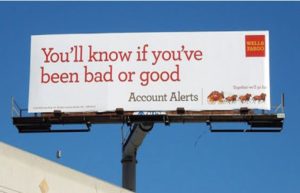 Wells Fargo Among the Worst Corporate Actors in 2017.

It is a very common discussion in the news these days: how much is too much regulation?  Americans generally favor risk, rugged individualism, personal responsibility, and the chance to define what liberty means for ourselves.  Or, at least, that is what we tell one another.  For every complaint that “regulations are killing businesses” in America or that they’re sending jobs overseas, there is a company claiming Bankruptcy protection (using the law in their favor), requesting favorable tax treatment, or seeking benefits from the Federal, State or Local governments in order to assist their businesses.

Amazon, one of the largest and wealthiest companies in the history of the world, recently announced that they would consider proposals from cities that sought to host a new Amazon Headquarters.  A total of 238 cities and regions submitted proposals to entice “HQ2.”  Most offered free land, free facilities, infrastructure improvements, and favorable tax treatments.  The City of Chicago offered a plan with 10 possible sites and approximately $2 Billion (with a B!) dollars in tax incentives.  American companies seek the benefits of governments and favorable terms from the people who pay taxes and live in the locations where they do business.  Clearly, even the largest and wealthiest companies are not above availing themselves of the benefits of government.  (As of today, Amazon’s Market Capitalization stands at $560 Billion…with a B).

Let us be clear: companies should use leverage and get good deals, whether it be with a supplier or with their City’s government.  But those same companies must also accept responsibility for the wrongs they commit.  There is along list of companies that have had a tough 2017.  At the top of the list is Equifax, who had to admit that over 145 Million consumers’ data was stolen. The problem was made worse by Equifax’s failure to report the problem when they first knew about it (even though executives started selling stock before the news was revealed).  And then consumers learned that the breach was made possible by simple negligence committed by a company whose business model was built on protecting data, when they failed to update their software.

There are many other companies detailed in the report which you can find here.  Monsanto–the mega-agribusiness concern–promoted their own products by ‘ghostwriting’ scientific articles that claimed to be independent and made sure they were published in influential journals.  Takata–the airbag manufacturer–has been in the news for years now, the layers of scandal about their defective airbags unfolding over and over and over again.  In the media, there were revelations about years of cover-ups at FoxNews, hiding the magnitude of sexual misconduct that took place there, as well as the money that had been paid to silence victims.  Wells Fargo was in the news constantly for a variety of consumer fraud, including opening accounts that were not authorized and charging consumers fees.

THE JUSTICE SYSTEM IS THE LAST RESORT

One consistent theme from the present Presidential Administration is that regulations are hindering business progress in the United States.  They have taken actions at several agencies that have either eliminated regulations or scaled back enforcement of laws and rules.  This likely means that corporate actions will go ungoverned: consumer fraud; pollution; product failure; sexual misconduct; employment discrimination.  The political pendulum will always swing back and forth, leading to differing levels of investigation and enforcement.  However, one place that consumers can always turn for help is to Trial Lawyers.

Often, the media will cover claims made by lawmakers that “lawsuits are out of control” or “trial lawyers are just trying to get rich.”  These claims seldom have any factual support–and usually delving into the facts undermines them.  But the purpose of such claims is to stir up support to change the Justice System.  If people cannot sue a corporation for fraud or for unfair fees or a product that fails and maims or kills a family member, then justice is denied.  Without a check on reckless corporate behavior, products will be more dangerous and companies will act more recklessly.  It is simple economics.  If there is no penalty, it would cost more to fix the product than to simply sell it and hope there is no consequence.

It can be frustrating to hear about so many lawsuits in the national media, making it seem like everyone is suing someone for something.  That is, until you are the one who needs to talk to a lawyer.  There are lawmakers in Washington and Illinois and states across the country who want to make it impossible to hold companies accountable.  They have ALL the leverage.  They make the biggest campaign donations.  Read the report.  Educate yourself about the risks of corporate malfeasance–both medical and financial ruin for individual people.  And support lawmakers who want to keep a level playing field for individuals in the dangerous gap between the limits of regulation and the rare instances when a company is criminally responsible.  That is the gap filled by private, civil, Trial Lawyers who are not government regulators, do not get your tax dollars, but are hired by you individually.  To help.