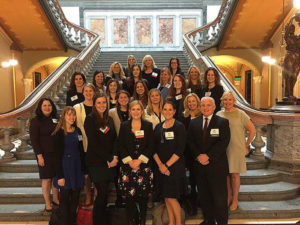 When Sarah F. King and several other female members of the Illinois Trial Lawyers Association started discussing forming a women’s caucus for the organization last summer, they wanted to know how many women attorneys actually belonged to ITLA.

They went to group’s Executive Director James Collins to find out.

“I was honestly expecting him to say something under 100,” said King, an associate at Clifford Law Offices. “So when he told us that there were more than 300, we were all blown away.”

King said the 367 women members, out of roughly 2,000 total members, highlights the need for women’s caucus within the plaintiff lawyers’ organization — “if only for us all to get to know each other better and use each other as a resource.”

King is now co-vice chair of the women’s caucus, along with Sara M. Salger, an associate at Gori Julian & Associates P.C. in Edwardsville.

The caucus chair is Margaret P. Battersby Black, a partner at Levin & Perconti.

“We put together a proposal for the ITLA Board of Managers and we had a lot of support from the executive committee and our director James Collins,” she said. At its meeting in June, the board of managers approved the creation of the women’s caucus.

The primary goal of the caucus is to make sure women have greater representation in the organization generally and in leadership positions, whether that means recruiting more women for the board of managers or having more women responsible for planning programming for Continuing Legal Education.

ITLA can be seen as a male-dominated organization, Battersby Black said, because to some extent that’s true.

Women comprise only 18 percent of total membership. The organization, which formed in 1952, named its first and only female president, Judy L. Cates, in 2006. She’s now a justice on the 5th District Appellate Court.

“I think everyone recognizes now that diversity in any organization really helps take it to the next level. Certainly, allowing women to be more involved and have their own voice helps bring a different perspective,” Battersby Black said.

In addition to helping generate more female membership in ITLA and more women leadership in the organization, Battersby Black said the women’s caucus at ITLA provides a place for female plaintiffs lawyers to network or share ideas and concerns.

She said this can be beneficial for younger female lawyers who are just starting out as well as women who have experience but may not work at a firm with many female plaintiff attorneys.

“I think women sometimes find it easier to approach each other about sharing ideas and sharing work product,” Battersby Black said.

She said the caucus is also a way to get female ITLA members more involved in the group’s lobbying efforts.

Last month, 27 women from the caucus traveled to Springfield to introduce themselves to lawmakers.

“We wanted them to know who we are, because there are always issues that affect our clients that are going through Springfield, and it’s anyone’s guess when the next one will be up for a vote,” Battersby Black said. “We wanted to make sure we introduced ourselves and that they know we are advocates for our clients and our client’s rights are important to us. If and when something comes up that needs attention, hopefully they will remember us and know who we are.”

The caucus has organized a seminar, co-sponsored by the Women’s Bar Association of Illinois, for May 4 that will have presentations on a variety of topics.

All but one of the presenters at the seminar will be women. The seminar will also include a discussion about career advancement, featuring an all-women panel.

“The goal is to see how many women we can get to attend this seminar, and hopefully we can inspire as many as possible,” she said.